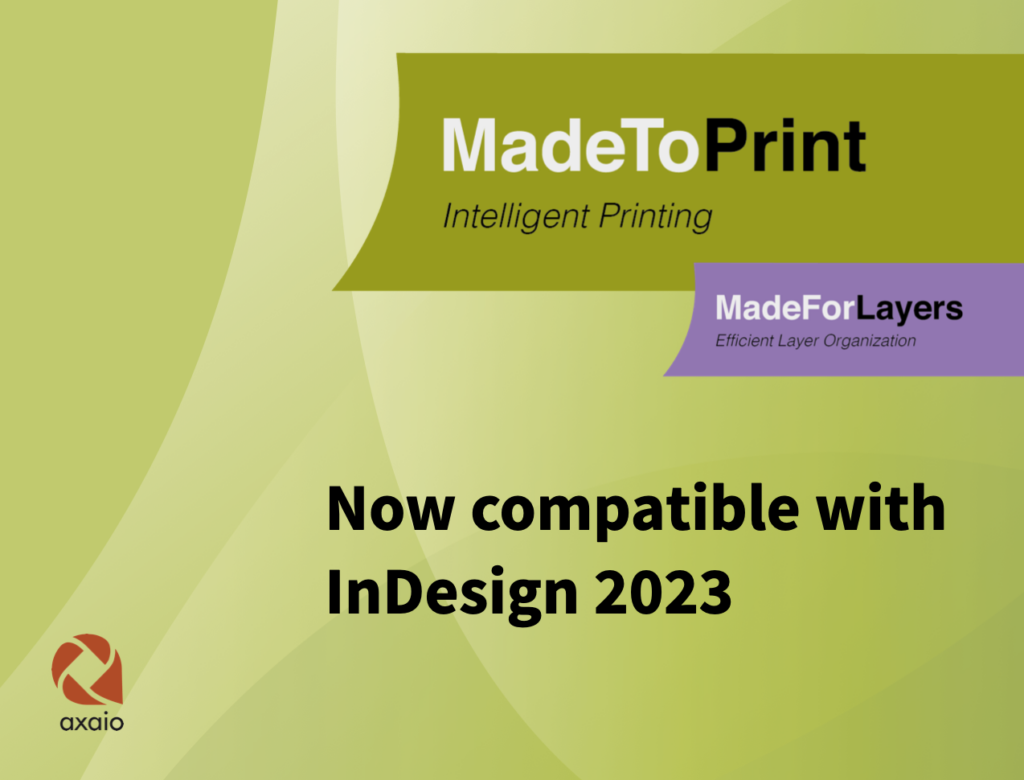 Berlin/Germany – axaio software, developer of solutions for PDF output, print and editorial workflows for the publishing and print market as well as for creation of accessible PDF documents, announces the immediate availability of MadeToPrint (v 3.2.346) and MadeForLayers (v1.5.055) for Adobe's latest InDesign/InDesign Server version 2023 (v18.0).

MadeToPrint is the international industry standard for the automation of print output processes in Adobe InDesign/InDesign Server (among others). By standardizing repetitive print and export settings merging even complex output steps, and ensuring consistent output results using tailor-made proofing profiles, the output reliability of formats such as PDF, EPS, etc. is significantly increased and production time reduced. The Server version of MadeToPrint in combination with Adobe ID Server guarantees maximal stability and an improved performance, especially in environments with high-volume document production.

At a glance: Improvements MadeToPrint version 3.2.346:

The entire release notes of the new MadeToPrint 3.2.346 version can be found on the axaio website.

MadeForLayers as a plug-in for Adobe InDesign and Illustrator, simplifies the editing of documents that contain a large number of layers. Multiple layers are combined into layer views to display document versions, such as a technical or language-specific version, with a single click. Errors are minimized and valuable layout time is saved by reusing previously created layer views. MadeForLayers is included as an integrated functionality in MadeToPrint by default, for an automated output of layer views to various export formats.

A free 30-day trial version can be downloaded from the axaio website.

If you have any questions or would like to get a demo, please do not hesitate to contact us: sales@axaio.com

Karina Zander began her professional career in the automotive software industry before moving to the print and publishing branch in 2003. Karina has been active in the field of prepress software commerce for over 15 years. Before joining axaio in 2009, she worked as Marketing Manager for callas software, whose sister company axaio is. At axaio Karina is responsible for …

MORE POSTS FROM Karina
ALL POSTS BY Karina

Announcing the release of iText Suite 7.2.5