Researchers in the DARPA-funded SafeDocs project are pushing the state-of-the-art in Data Definition Languages (DDLs) by attempting to formally capture and encode all the rules of the PDF file format. These formalisms can identify ambiguities, unstated requirements and other issues.

A recent discovery unearthed using these formal approaches had remained undiscovered since PDF 1.0 back in 1993! The issue is that inline images can use either full key names from Image XObjects or for many keys an equivalent short abbreviated key, as listed in Table 91 of ISO 32000-2:2020. The ambiguity occurs when both a full key and an abbreviated key for the same semantic entry are present in a single inline image.

This issue was one of the first logged into the PDF Association’s pdf-issues GitHub repository as Issue #3. Timing was such that it just missed the publication of ISO 32000-2:2020 in December 2020, so the PDF Association’s PDF Technical Working Group reviewed the issue and established the following industry-agreed resolution:

This resolution will pass to ISO TC 171 SC 2 WG 8 (the working group responsible for ISO 32000) for inclusion in a future edition, however the ISO WG can alter the industry resolution.

I have created a single page hand-crafted targeted PDF test file that tests 8 semantic key collisions in inline image dictionaries. This freely-available PDF file is specifically designed so that each of the 8 test cases will only render correctly (as the blue blocky “IMG” text on a yellow background with a red border) if the abbreviated key name is used. If the full key name is used then something else entirely will happen (precisely what will happen is implementation dependent!).

A correct implementation will render 8 iterations of the above image.

I have included comments in the PDF test file and created it such that it may safely be viewed in a text editor. It includes the following structure in the page content stream for each of the 8 semantic key collisions:

In their blog post “Room for Disagreement”, the Galois researchers and I describe some of the tools and techniques used in SafeDocs that helped uncover this specific issue, as well as other issues in the PDF specification. They also detail each of the 8 semantic test-cases in greater detail.

A quick test of popular PDF viewing implementations across multiple vendors and platforms using this test PDF file shows that no vendor has yet fully and correctly implemented the recommended resolution and that almost all implementations have unique behaviour! This is somewhat unexpected, since intuition might imply that some implementers may have privately identified this issue and chosen their own consistent solution. However the random results using this test file indicates that parsing and processing of semantic collisions in inline image dictionaries is inconsistent. 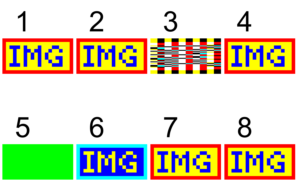 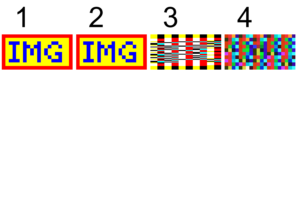 As this issue is newly discovered and only recently resolved in the respective industry forum, PDF viewers and renderers cannot be expected to have already implemented and released their solutions. Now, with the test file freely available, and clearly documented, I expect to see resolutions in the marketplace very soon, which should also help persuade the ISO WG to adopt the industry resolution.