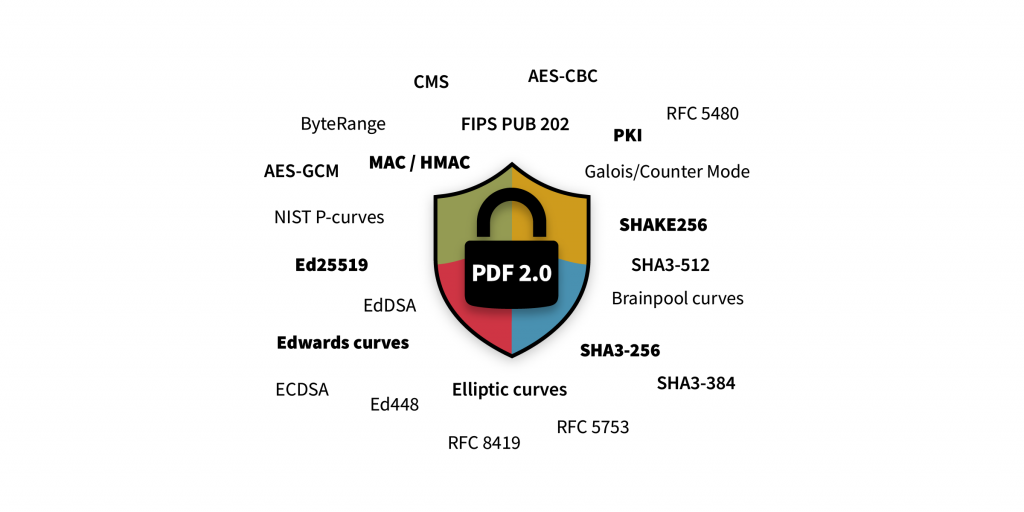 In order to more rapidly update PDF technology to address industry demands and advances in technology, ISO TC 171 SC 2 is publishing extensions and clarifications to PDF 2.0 as separate ISO Technical Specifications (TS). The first pair of ISO-approved PDF 2.0 extensions update the set of supported hash algorithms and extend PDF digital signatures to include modern elliptic curves. These short documents use well-known and widely-implemented existing cryptographic algorithms and are built on top of the digital signature and encryption frameworks that already exist in PDF. 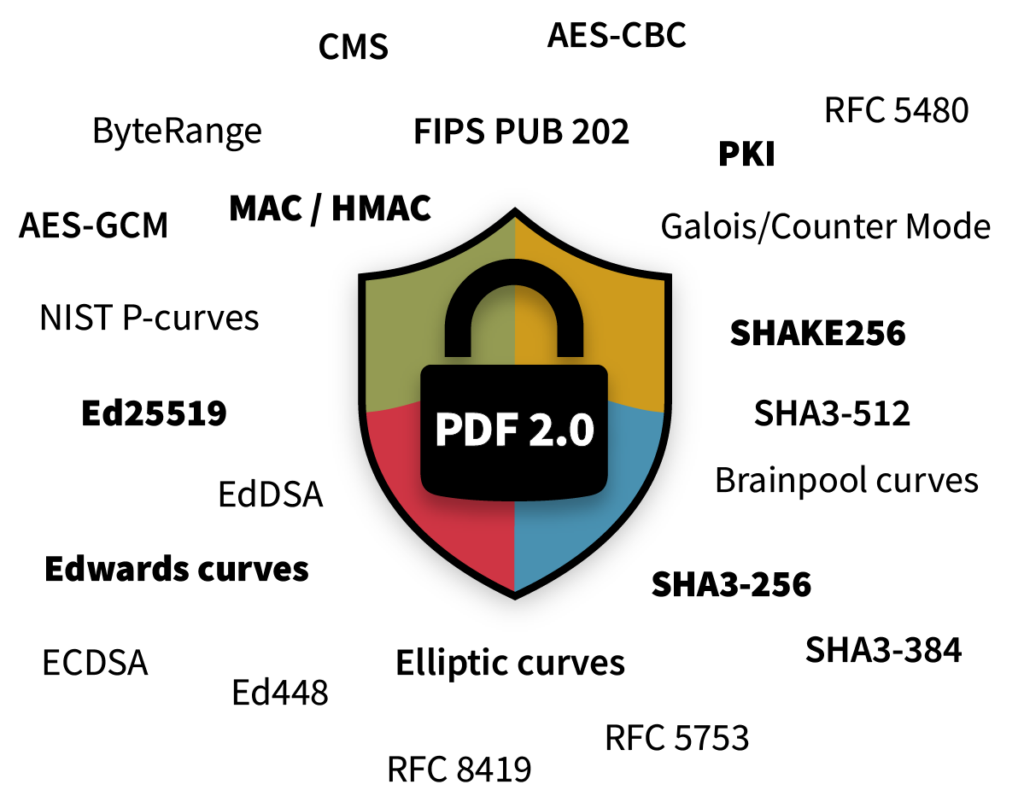 An ISO TS follows the same rigorous development processes used for International Standards (IS), but works with an accelerated schedule better suited to the rapid rate of change in software, making it possible to bring new features to market far more quickly than updating and republishing a full new edition of ISO 32000.

These short ISO TS publications for PDF 2.0 are normative documents that are now part of PDF’s core specification; they are therefore as authoritative as ISO 32000 or any of the other ISO-standardized subsets of PDF such as PDF/A, PDF/X or PDF/UA. ISO TS publications are only available for a maximum of 6 years, with reviews by the ISO committee at 3 year intervals. It is expected that the content of ISO TS extension and clarification publications will be incorporated into the core PDF specification document itself within the 6 year period.

As listed on the PDF Association’s ISO status page, as of the end of 2022 there are four separate PDF 2.0 cryptographic related extensions:

Although not yet finalized and published, ISO/TS 32003 extends PDF 2.0 by adding support for AES-GCM (Advanced Encryption Standard - Galois/Counter Mode). Without going into the technical details of how AES encryption and its various modes of operation work, AES-GCM is a more modern algorithm that provides authenticated encryption (i.e. confidentiality as well as authentication).

Back in 2004 PDF 1.6 first introduced support for AES-CBC (Advanced Encryption Standard - Cipher Block Chaining) with various bit lengths up to 128 bit. In 2017, the first edition of PDF 2.0 (ISO 32000-2:2017) extended the bit lengths to include 256-bit AES-CBC, while also deprecating all shorter bit lengths. This was because in the intervening years shorter bit lengths had become susceptible to practical new attacks. ISO/TS 32003 goes further in enhancing document security to add 256-bit AES-GCM.

As soon as ISO/TS 32003 is published, it will be available for purchase from the PDF Association.

Although not yet published, ISO/TS 32004 has already been discussed in several PDF Association articles including ISO 32004: an overview and MACs vs. signatures in PDF.

As soon as ISO/TS 32004 is published, it will be available for purchase from the PDF Association.

As with any feature defined in ISO 32000, PDF software vendors are free to choose which extensions and features are implemented. But if that software supports a new PDF 2.0 feature that support must fully comply with the appropriate ISO TS publication and ISO 32000-2 (PDF 2.0).

As digital signatures, modern hash algorithms and encryption are all vital for many workflows and documents, it is expected that mainstream PDF products (both PDF creators and PDF viewers) will implement all PDF 2.0 cryptographic extensions as soon as they are published.

Extensions defined by ISO TS publications are not supported by PDF 1.7 or earlier versions - they are specific to PDF 2.0 only.

How do I know if a PDF file is using a new cryptographic feature?

The PDF extension model was introduced with ISO’s first standardization of PDF: ISO 32000-1:2008 (PDF 1.7). The Document Catalog Extensions entry (a set of direct data structures specified in clause 7.12 “Extension Dictionary”) provides the means by which a PDF document can declare the extensions support that it requires beyond the core feature set of ISO 32000.  As shown in the example below, a single PDF can depend on multiple extensions from multiple vendors:

Although the Extensions entry is required by all PDF files using ISO TS extensions, neither PDF 2.0 nor the ISO TS extension specifications mandate or describe how the data should be used by software. In addition to enabling support, the Extensions entry also provides sufficient data for software to present useful feedback to users who open a PDF file containing unsupported extensions. Similar information might also be presented in a File… | Properties dialog when listing the PDF version and other meta-information about a PDF file.

A critical aspect of development for ISO TS extension publications is interoperability testing and practical confirmation that the document is unambiguous to all developers. As a result, some early technology is already available.

PDF Association members have access to sample ISO/TS 320001 and ISO/TS 32002 PDF files in GitHub that have been created and shared within the PDF Digital Signature Technical Working Group (TWG). Via the PDF Association liaison status with ISO, members can also get access to drafts of all ISO documents including ISO TS extensions and clarifications.

The PDF Digital Signature TWG is the right forum for members to discuss and learn about these new cryptographic extensions.

Contact your vendor today to find out when support for these ISO cryptographic extensions for PDF 2.0 will be added to your PDF software. If you are interested in contributing new ideas or to learn more about PDF digital signatures, then become a member of the PDF Association and join the Digital Signature Technical Working Group.