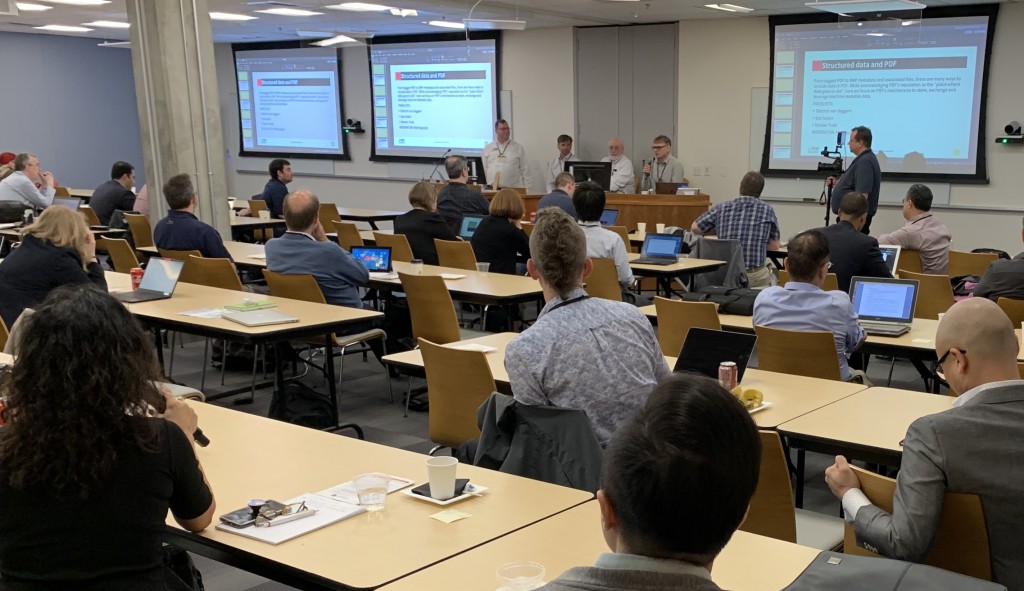 My takeaways from the EDC 2019 in Seattle

I am just back from the PDF Association’s annual event, the EDC (Electronic Document Conference), in Seattle. In short: I think it was a very good event and I am happy that we decided to have it in North America this year. It is always helpful to talk about recent PDF developments and to hear what others, end users as well as developers, think about those. 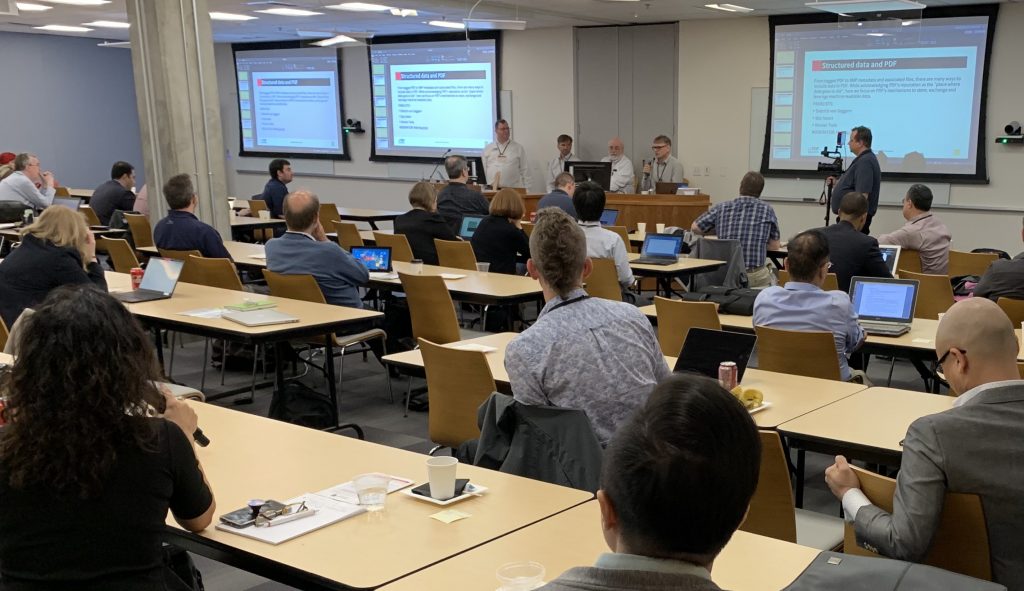 One thing that we (the attendees) came back to various times during the event is that PDF has many more features than currently being used and that it is important to educate users and developers – which made for the title of this blog post. Part of that mission is that from now on, this annual event will alternate between Europe (next year) and North America.

There were many good presentations but I personally enjoyed the keynotes very much. Day one keynote speech was given by David Blatner from CreativePro (an extraordinarily successful event for designers, that happened to be in Seattle just the week before). He talked about publishing and what role PDF plays in it today - as a container for information - e.g. in a “bio-optical organizational knowledgebase” better known by its acronyms... In various examples he demonstrated that information can’t always be transferred in a reflowed way. 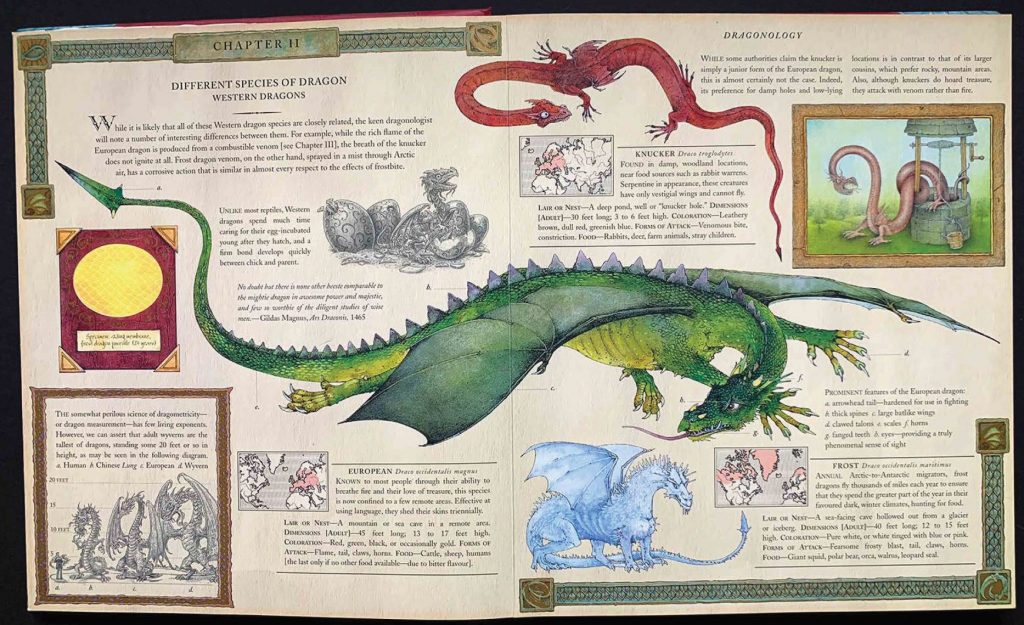 He contrasted this kind of reassuring view on the design capabilities of PDF with requests about how it should evolve. Designers want it to be more interactive: Why does an animated gif placed in InDesign and full of motion there lose all animations when exported to PDF? Why is a grid layout (as in CSS) where object positions are defined in relation to other objects and not by absolute coordinates not possible in PDF?

The second day started with a keynote from Kenny Swope from Boeing. He showed how his company thinks and introduces digitalization: It is not just about putting computers onto the office desktops in the company. It is about rethinking the way processes are organized and performed. In a production oriented company like Boeing, it is not just replacing paper with PDF in office processes. Facilitating workflows means to use rich features of PDF such as 3D models (in PDF annotations) or embedded files in smart ways that were never possible with paper. Complex processes are involved in the creation of an airplane from acknowledging a need to delivering and maintaining an airplane and it is easy to see that all these processes require active management of their documentation. Digitalization of such complex processes can’t just take place on an operational level but becomes a central task for the overall management of the enterprise. 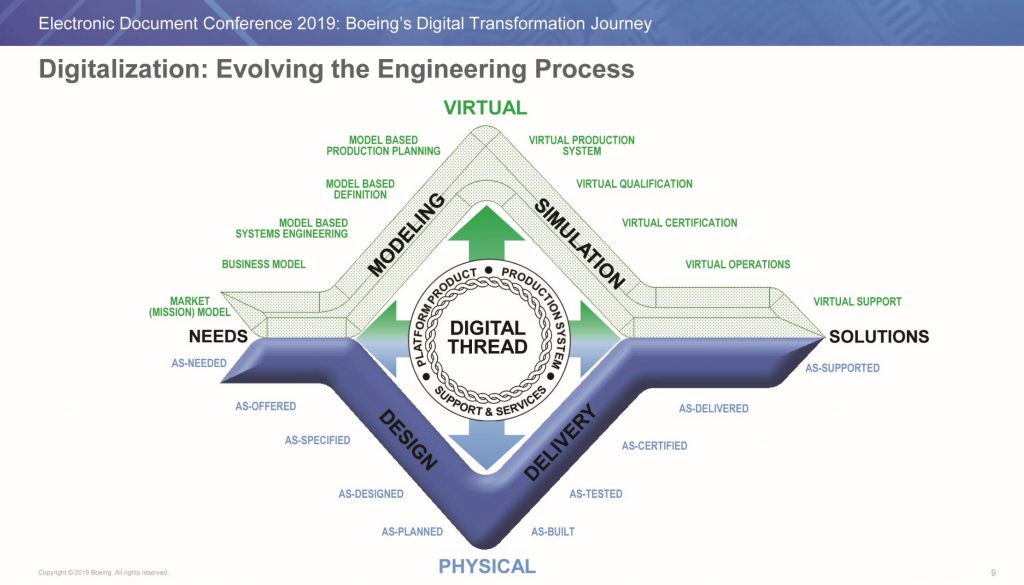 Another hot topic during the event was redaction (which means to completely remove information from a document). Probably everybody working in the realm of PDF has heard about at least one case where this went wrong – in fact PDF with its abilities for incremental updates, layered information, metadata, hidden objects (not accessible via standard PDF viewers) has many opportunities to fail here. The discussion was triggered by the Mueller report where the Department of Justice published scanned paper ignoring even the simplest form adding value to a digital document. Whether or not they have done so to avoid redact failures - since this has already been discussed here let me finish this blog by stating that also in this case we can see that PDF technology really matters.


Are you leaving document archiving to chance? PDF/A