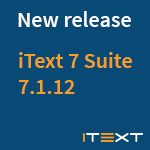 Of particular interest in this Core release is the initial support for <linearGradient> in SVG and linear-gradient() in CSS, which is something that both Core, and iText pdfHTML (3.0.1) will benefit from. SVG is an important topic for us, so be sure to check our future releases, as even wider support is coming.

This release brings improvements for automatic table recognition, particularly in the case of borderless tables.

If you find pdf2Data useful for document data extraction, be sure to also check out iText pdfOCR.

A new feature in this release is the introduction of support for <linearGradient> in SVG and linear-gradient() in CSS. For those of you who are interested, we've produced a code sample demonstrating different implementations of within our layout engine.

Besides this, we continue to improve our line-height property support that was added for pdfHTML 3.0.0 and added support for setting the background on HTML elements. Something that will continue to be improved (we'll keep you posted!)

We launched pdfOCR end of June and now we're already releasing 1.0.1! We've made improvements to the way that the calculations for word bounding boxes are made, so that in languages where ligatures are required, we are able to properly detect the text and render each character correctly.

This change is especially for our pdfCalligraph customers, so that they can render advanced typography in their OCRed documents.

In a nutshell, the flattening process supports a wider variety of scenarios. This is a bug fix only release, as no new features have been added.

We always release RUPS together with iText 7 Core, as it is one of the most important dependencies it has (so all the goodies in Core, should make its way into RUPS). For this release in particular, we've also targeted and addressed the CVE-2020-10683 vulnerability. Happy debugging!

For full details on the improvements, bug fixes, and installation details, head over to the iText 7.1.12 Release notes on the iText Knowledge Base.

Singapore NDI: Is your business ready to integrate?