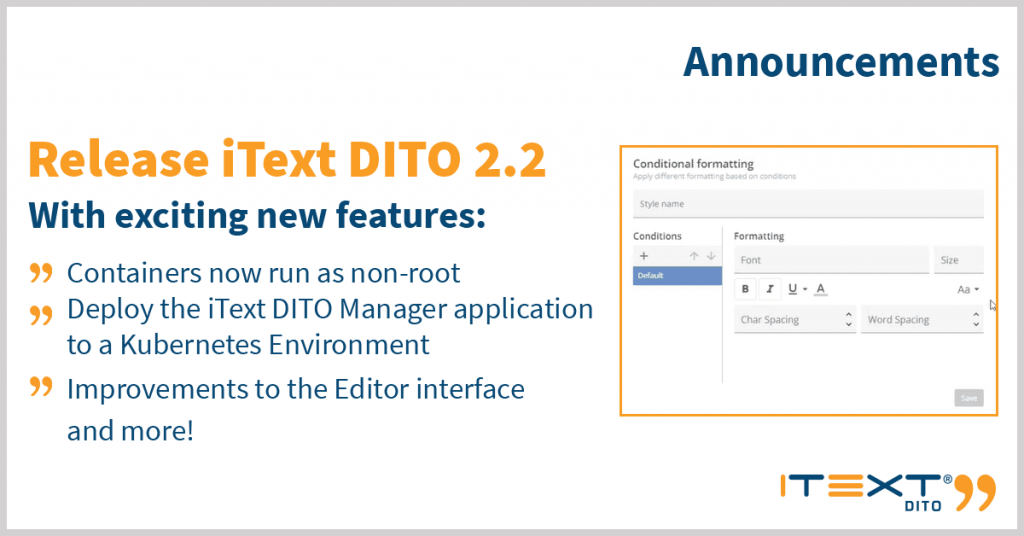 The biggest upgrade within the Editor component of iText DITO is that we have changed our containers to be run as a non-root user, allowing you to set users rather than running containers as root. We have added in a guide to help users upgrade from pre 2.2 versions for the Editor Docker container which you can view by clicking this link.

A major upgrade for iText DITO 2.2 is that it now has native support for iText DITO deployment on Kubernetes. All deployments, services, persistent volume claims and configuration maps can be specified in a single deployment file to simplify its management. The preferred file format should be YAML because this format allows you to store several documents into a single file. Click this link for instructions on deploying the iText DITO application to a Kubernetes environment.

Previously iText 7 and iText DITO had separate licensing mechanisms but with the release of iText DITO 2.2, it will now be using the same licensing mechanism which was introduced with the release of iText 7.2. The licenses for the new versions of iText 7 and iText DITO will now be using a JSON structure rather than the XML structure that was previously used. For additional information you can reach out to your Sales Rep. or our Sales team regarding your complementary license update.

The biggest update for the iText DITO 2.2 release is that it now supports multi tenancy account management, allowing you to create workspaces that will have a child relationship to the workspace from which they were created. This allows companies with different divisions or branches to manage their own data collections, templates, and assets independently from one another.

We have improved duplicate entity detection when importing templates. In cases where two templates were originally tied to the same data collection, images or templates, users can use the latest versions of these files.

We have expanded upon the capabilities for the rules of user creation to support different languages, diacritics, dashes and double first or last name in the First and Last name fields of ‘Create user/ Edit user profile and Edit user name’. 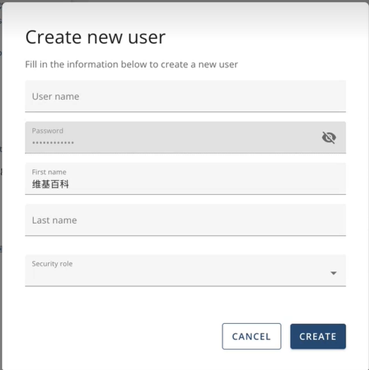 With the release of iText DITO 2.2 there have also been improvements made to the Editor interface which allows for easier editing & styling. We have redesigned controls for text styling within the Editor component to create a cleaner and more efficient design. Additionally, we have integrated the font, font styling and toggle buttons into the Edit Style Modal. 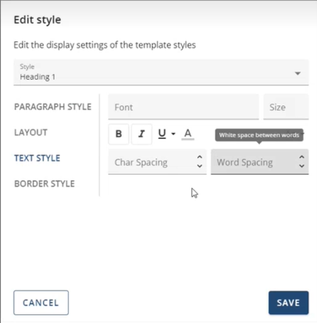 Our new Page Counter mode is now also compatible with PDF/UA and allows users to manually fix their templates. We have implemented new features which allows users to add borders, text alignment and other element properties to the page counter. In the example below we have added borders to our page counter:

The biggest update implemented within the iText DITO SDK component is a “Reconnect” button to reconnect to the instance which lost connection, as well as the option to replace the broken instance with another one. We have also whitelisted <br/> and <ul> / <ol> and <li> whereas previously it only accepted a couple of HTML tags when inserting rich text from data.

There are other nice improvements and upgrades that have been implemented into the release of iText DITO 2.2. This includes an improved embedded stylesheet name handling during Legacy template import. As well as an improved innovation for user creation that supports different languages, diacritics, dashes and double first and last names in the first and last name fields of “Create user/ Edit user profile and Edit user name”. There is a more comprehensive rundown of the new changes in the v.2.2 release which you can have access to by downloading the Release Preview Guide. If you want a short version of the improvements, you can also check out the release notes as well!

If you’re not already an iText DITO customer, we recommend exploring all its features and capabilities with a free 30-day online trial!

If you are interested in learning more about iText DITO.

iText Group is a global leader in PDF technology, including iText 7 Suite and iText DITO. iText 7 Suite is a comprehensive open source PDF SDK which includes iText 7 Core and optional add-ons to give you the flexibility to fit your needs. iText 7 Core is a PDF library …

Why JDF is Seriously Important for the Future of Print Shops Jonathan Malone-McGrew
December 3, 2021
PDF in general

Why JDF is Seriously Important for the Future of Print Shops