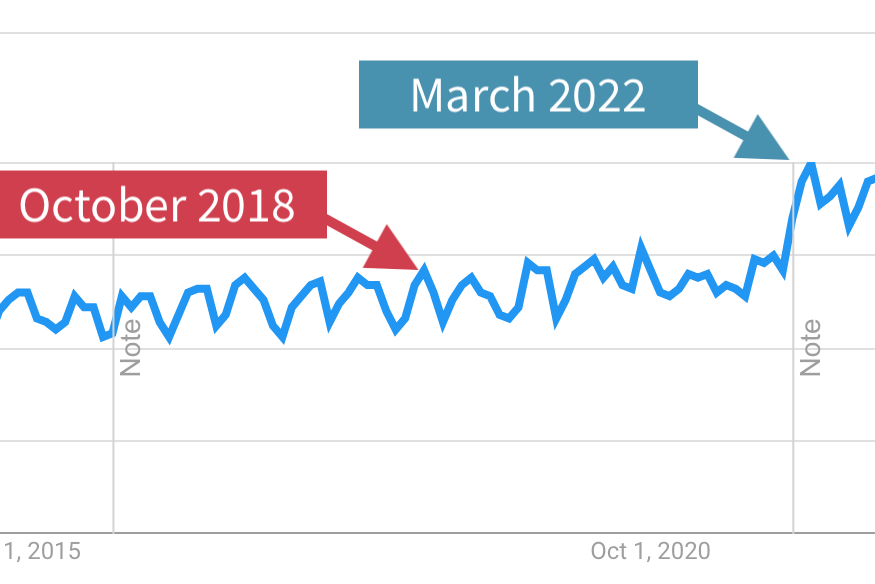 Google Trends reports on the frequency and a few other characteristics of given search term usage relative to all searches happening on Google (more about how Google Trends works). Results are recalculated over time, so you may not get precisely identical results.

Four years ago I looked at "peak pdf” - the moment when interest - however tangential - in the portable document format seemed highest. As of October 2018 peak pdf had come in September, 2015. As of my check on October 28, 2022, however, peak pdf was in March of 2022.

Attempting to understand how people think of a given idea by way of search engine statistics might be limited and/or fraught, but it also has the very great advantage of being free and easy to the end-user... and at the scale in question, it's at least interesting to consider, not least because, absent China and Russia, we’re really looking at almost all internet searches conducted worldwide.

When we look at the overall trend it's clear; although the curve is flattening pdf is more popular worldwide in 2022 than in 2018.

Of course, 99.9% of those searching for “pdf” have no interest in the format itself; we can infer from their inclusion of “pdf” in a search that they are looking for something related to a publication, form or document. It's a reasonable conjecture that when users add "pdf" to their search it means that they are not thinking about an HTML web page... except, perhaps as a place from which to download the pdf that they seek.

Web pages are more dynamic than ever before, but  they are no more “documents” than they were in 2018. Although web pages can serve “document-like” functions in many ways; in practice it's "pdf" that comes to user's minds. Almost 30 years since the PDF format launched in 1993 PDF applications and usage continue to grow; the ecosystem becomes larger and more vibrant each year.

PDF is key to digital transformation precisely because a self-contained, reliable and capable portable document format does what other web technologies do not. PDF complements web technology; it does not compete with it.

So, let’s check in to see how PDF is faring in internet searches since 2018. What follows is a series of screen-shots, as Google Trends does not (yet) facilitate sharing a snapshot of a given search (PDF would work well for that :-). These searches were conducted on October 28, 2022, four years to the day since my previous article on this subject.

Users may be reading, banking, signing and commenting online using other technologies, but the world’s chosen general-purpose document format continues increasing relative to all searches.

As of October 28 2022 worldwide searches for PDF peaked in March, 2022. Google recalculates all the time, so your exact results may vary.

Just how popular is PDF compared to, say, "YouTube", which is the most popular search-term Googled worldwide. PDF is catching up, but clearly has a long way to go.

The larger peaks and valleys align with December and July of each year, so worldwide searches for "pdf" are increasingly correlated with overall work/holiday cycles in the western world. Of course, it may also - or even simply - reflect the fact that with Baidu's rise in 2008/2009 Google began to lose its spot as the dominant search engine in China.

As pdf's upwards trajectory has slowly flattened its seasonality has grown. That trend began to change in March, 2020, with the advent of the pandemic; searches for pdf show reduced seasonal change throughout 2020 and 2021.

Having established that interest in pdf is accelerating worldwide we may want to know: where are searches for "pdf" increasing relative to all web-searches, and where are they not?

In 2018 I reported that "peak pdf" in the United States occurred in September 2015 - four years later the data has changed a little. Google Trends now reports January 2015 as the USA's peak pdf, but there are several peaks thereafter at 98 or above. Given more searches every year PDF's staying power is impressive. Few technologies show as much resilience.

The interesting “sag” in relative searches for pdf began in November, 2020, and persists until January 2022, when Google states that they began an “improvement to their data collection system”. I checked results from 30+ countries; only predominantly English-speaking countries appear to show the effect. Perhaps the US general election or its aftermath has distracted people from pdf? We’ll never know.

By contrast, pdf's popularity in Germany has continued relatively steady, although Germany sees much less seasonality as compared to the USA. Perhaps PDF is more fully integrated into German’s personal lives? Observe that peak PDF in Germany occured in June, 2018… at that time many Germans were searching for “wm spielplan pdf” and variations thereof. Or, at least they were until June 27, 2018...

So, what other tech concepts or products compete for user’s searches? There are certainly some examples.. “iPhone” is a more popular search but its overall trend is down, whereas PDF is still trending up. It’s difficult to find other subjects in tech with a trend like that of pdf. Even the “internet”, which once dominated “pdf” in search rankings in the US, is now falling behind “pdf”. Both terms, however, pale in comparison to “app”. No surprise there!

PDF on GAAD: because it’s the content you keep PDF/UA